Hollywood filmmaker Quentin Tarantino celebrated is celebrating his 58th birthday on Saturday. Tarantino is one of the most celebrated people in Hollywood and his style is seen as unique but without any moral obligations, so to say. His movies have B-movie tropes, and yet there is nothing schlocky in them. It’s just high-quality filmmaking.

Tarantino’s movies are known for long stretches of nothing happening except people talking, and since he is so good at crafting engaging dialogue, they are never boring. The last act of Tarantino’s films is a masterclass in filmmaking so on his birthday, we decided to check out five of his best endings.

Once Upon A Time In Hollywood Brad Pitt, Leonardo DiCaprio and Margot Robbie in One Upon a Time in Hollywood. (Photo: Columbia Pictures)

The most recent Tarantino movie, Once Upon A Time In Hollywood was also a slick recreation of late 1960s’ Hollywood with immaculate attention to detail. But it was the ending of the movie — specifically the last fifteen minutes — that blew everything else that came before out of the water. The Manson Family members and would-be killers arrive to kill Rick Dalton (Leonardo DiCaprio, and come across an extremely high Cliff Booth (Brad Pitt). Mayhem ensues. One of the best, most cathartic endings of Tarantino’s filmography but it would not have felt as earned as it did without the buildup. Another cathartic conclusion in Tarantino’s film career, Django Unchained has Django (Jamie Foxx) avenging his wife Broomhilda’s (Kerry Washington) tormentors and slave-owners who killed his friend Schultz (Christoph Waltz). The film ends with Django and Broomhilda riding off together. 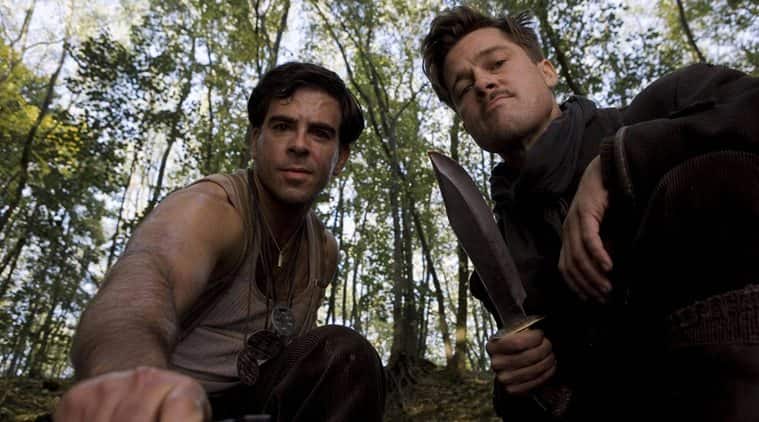 At the end of Inglourious Basterds, Brad Pitt’s Lieutenant Raine just cannot bring himself to spare Waltz’ Landa. Like his previous Nazi victims, Raine carves a swastika on Landa’s forehead. While it is hard to watch, the viewers just cannot help but be happy after all the Nazi official’s atrocities against Jews. One of Tarantino’s best and sadly least-watched films, Jackie Brown has Pam Grier’s titular heroine leaving with the remaining money of Samuel L Jackson’s Ordell Robbie. She requests Max (Robert Forster) to come but he politely declines. She drives away. This is a quiet, understated ending that is great while also being unlike most Tarantino films.

The serial killer Mike McKay (Kurt Russell) finally gets his comeuppance after murdering multiple young women at the end of Death Proof. He is beaten with a pipe but escapes. After chasing him down, the women push his car off the road. And then they beat him to death. It is both gruesome and satisfying.

Some Of The Content In Our Feed Is Generated From Foreign Sources And Modified By Us. We Do Not Take Responsibility Of Promotions, Claims And Unintentional Mentions.
We Actively Publish And Promote Content- You Can Mail Us The Draft With/Without Images at [email protected]